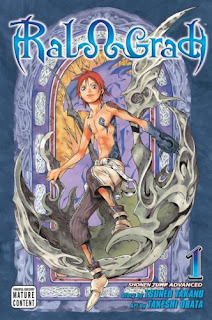 The team of Tsugumi Ohba and Takeshi Obata seems pretty much invincible when it comes to dialogue-led manga.  Death Note came out and gained legions of fans and Bakuman pretty much did the same again, but what happens when that team is broken up?  RalΩGrad (we’re informed not to pronounce that omega) has the same artist, but the impact of a different writer is interesting to read.

Ral is a prince possessed by a shadow at birth which has the power to assimilate and consume its host.   With the threat of his transformation imminent, Ral is locked into a prison without light before he can attack his father’s kingdom.  Over the years Ral forms a pact with his shadow (Grad) to work together as equals, and when asked to defend their home from invasion, they fight together against a common enemy.

RalΩGrad’s biggest problem is its dumping too much information on its readers.  The unnecessarily convoluted descriptions on shadow classes (who basically range from possessed humans to full-blown monsters) and the endless world-building starts to take its toll on story progression.  The fights could’ve acted as a break to even things out, but they are tactical in nature with an equal emphasis on dialogue as much as action.  Also working against it are overly-complicated monster designs that are squeezed onto the pages.  Even at the end of the final volume I still couldn’t really tell you what Grad looks like as we never get a proper look at him.  Essentially the comic’s trying too hard to impress and doesn’t find much time to relax.

It’s not quite as bad as I’m making out though.  The artwork is amazingly detailed and Obata’s clearly gone all out after his stint on the more internally dramatic Death Note (great manga, but for an artist drawing a guy writing in a note book it’s not much to play with).  I also really enjoyed the crude sense of humour of  Ral and his penchant for ‘boobies’.  For a shonen manga this contains a lot more nudity than you’d expect as he nuzzles in on many a nearby cleavage.  It’s really stupid, and helps things from becoming too po-faced in an otherwise typical and straight-laced manga.

With only a 4 volume run, this is a brief and rushed affair.  Far be it from me to give a manga a bad review, but I found it difficult to read at time due to its sheer density.  Most manga can be read in a matter of minutes, but it took several attempt to fight through.  This is stodgy stuff and perhaps only really worth checking out for curious Death Note fans. 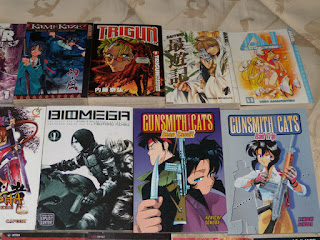 It’s been a rising trend for a few years now and is pretty much in full flow by now, and the idea of discussing its relevancy is in itself pretty much irrelevant already.  It’s here and it’s not going to go away any time soon.  Be that as it may I still feel the urge to talk about ebooks.

So yes I’m one of those old-school grumps who likes having books on my shelves, and I want to whinge about my concerns.

The benefits of ebooks are easy to understand, ‘easy’ being the operative word.  It’s convenient to be able to have a multiple books on you at any time while avoiding the bulk.  Ebooks are also generally cheaper and aren’t susceptible to running out of print which avoids heavy browsing for obscure titles on auction websites.  But while easy is one thing, lazy is another.  I can’t help but feel that publishers who can’t be bothered to maintain an inventory will simply refer their readers to their digital copies as an easy out.

The issue of digital content has often been highlighted in the media, particularly towards the issue of copyright and piracy, but also that of ownership.  It’s easy to pass a book on to a friend, but the idea of switching USB sticks with a friend could prove legally inviable (if it isn’t already, excuse my ignorance).  Also the digital world is very fast moving.  Formats quickly come and go and entire collections run the risk of being outmoded in a few years.  It already happens with home media such as video games and films every decade or so, so it’s not impossible.  Just how much do you own that comic, and how reliable and sustainable is the current format?

For me comics are about the physicality of turning the page to discover more of the story.  I also like the idea of publishers going to the trouble of making an actual product as opposed to taking my money in exchange for a data file.  Materialism can be counted as a character flaw, but once I’ve got that book that, it’s mine and I can do what I want with it.  I can throw that shit in a time capsule, and it’ll work just as good when I dig it up again in 50 years’ time.  I don’t need to update my eyeballs, and I don’t need to shove a compatible rechargeable battery into it either.

I do think that content for short-time use it quite a good idea.  Things like Viz’s weekly Shonen Jump Alpha and Yen Press’ monthly Yen Plus are as immediate as they are disposable.  So long as a proper edition is later available I’m up for it.  The real flaw in my argument?  I don’t own a dedicated e-reader which opens me up to cries of ‘if you had one you’d so convert!’.  Sorry, but I don’t see it.  If I wanted one, I’d get one.  I can already do it via my PSP or desktop, but I choose not to.  Even now I don’t like reading webcomics unless they’re doing something with the medium that only the digital medium could provide (like inserted flash animation or similar).  Some people go for that, and that’s fine, but given the option I’d take hardcopy any time.
Posted by Ushio at 05:31 1 comment:

Email ThisBlogThis!Share to TwitterShare to FacebookShare to Pinterest
Labels: Article 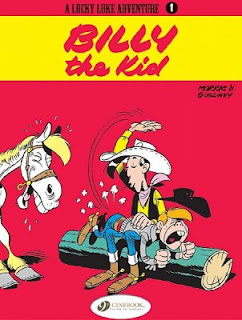 Everyone’s heard of Asterix, and most likely Tintin, but for most people that’s a far as it goes when it comes to knowledge on Franco-Belgian comics.  It seems strange that Lucky Luke has somehow slipped under the radar in English speaking territories.  It enjoys phenomenal success around the rest of the world, pulling in the kinds of sales figures that only the top manga artists could hope to measure up against (how does 300 million sound?), and while there have been sporadic attempts over the years to get Lucky Luke printed in English it’s only relatively recently that Cinebook have made some real headway into the 75+ volume catalogue.

For those new to the character, Lucky Luke is ‘The man who shoots faster than his own shadow’.  A quick-draw deadeye of a cowboy who can easily outshoot anyone, he travels on his trusty steed, Jolly Jumper, and travels from place to place righting the wrongs of thieves, bandits and anyone else up to no good.

‘Billy the Kid’ is originally the 20th Lucky Luke album from 1962, skipping the comic’s formative years and heading right into the classic stuff from when creator Morris was collaborating with René Goscinny (a name that might ring bells as the writer of Asterix).  Lucky Luke comics are stand-alone affairs however so any concerns about losing the chronology aren’t necessary.  As for the plot Billy the Kid has his entire home town cowering in fear at his gunmanship.  Everyone is too intimidated to press charges against him and he can essentially do as he likes and enforce his own sensibilities on the people.  The arrival of Lucky Luke in town upsets the balance as he doesn’t bow to Kid’s intimidation, and will plainly scold the misbehaviour like the child he is.

Events unfold and escalate as the gap between Luke and  The Kid widens, but the tone is ever light and it’s pretty clear no one’s really going to get hurt.  Instead of escalations in aggression, it’s creativity and clever mind games that win the day.  Light entertainment in hand with friendly artwork equals a work that virtually anyone could read and enjoy.  Its decades of success aren’t unjustified, and if Lucky Luke had been available to me as a child I’d definitely already have a bunch of them.  I’ve got some catching up to do…