My last entry on Mysterious Cities of Gold has proven to be one of my more popular posts, so I thought it would be appropriate to update the situation.

It appears that the second season of MCoG has been confirmed for an English translation and will be released on DVD by Fabulous Films next year.  These are the guys who released the first season over here so I'm sure they will do a good job. :-)

Here is the English language song for the new series:


In related news, there is also a video game in the works!  It's currently a France-only project, but a Kickstarter project appeared today asking for funds to put towards translating it into other languages.  We'll see in a month's time if was successful or not, but for those interested in finding out more can find it here.
Posted by Ushio at 15:51 No comments:

Email ThisBlogThis!Share to TwitterShare to FacebookShare to Pinterest
Labels: Animation 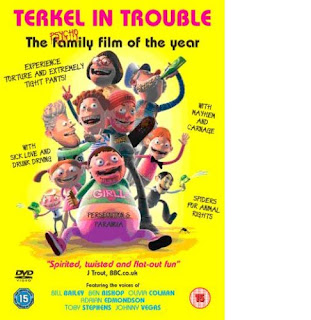 Living up to the title, Terkel is indeed in trouble.  He is bullied every day at school, has parents who ignore everything he says and has also started to receive death threats from an anonymous villain.  True, he’s still an arsehole to his little sister and becomes friends with his bullies by becoming one himself, but frankly many kids of a certain age have that shitty streak about them.  You can either be offended by this jaded depiction of childhood or just go with it.

This is what happens when you go outside of your safe zone.  Wanting to experience a wider variety in my animation I chanced this Danish offering and was served this truly bizarre comedy.  This is a CG film that’s starting to show its age with its curiously grotesque character designs, woeful lip-synching and patchy humour.  The original Danish characters were voiced by the same person whereas the English UK-centric dub uses several.  So while it’s fun to hear the likes of Johnny Vegas and Bill Bailey having fun with the work, there is a fundamentally different approach applied to each version.  No doubt some details are lost in translation, but the overall mean-spirited tone seems pretty consistent between the two.

It takes a sizeable chunk of its 77-minute running time to get your head around Terkel’s dark sense of humour, and by dark I mean totally-sucks-all-the-goodness-out-of-the-world kind of dark.  I’ll admit I sniggered at the early pissing scene and the steady stream of schoolyard swearing, but later on I sat agape at songs  making jokes about domestic violence and another containing the classic line of ‘Piss off and die, for you’re an ugly twat and your mummy likes to shag horses.’ (yes, there are random songs dotted throughout the film).  It will offend pretty much everyone, and for a while I honestly did not know how to take it.  After crying for mercy at it brutality of its worldview I turned off the 40-minute mark, only to return the next day and finding myself enjoying it a lot more.  It was probably the desensitisation to super-bleak Danish humour, but at least now I can say I enjoyed it even though I am probably a little more dead inside because of it.

This is definitely a film that people will either love or loathe.  I’m a lover, but would consider very carefully when recommending to people with any sort of moral compass.